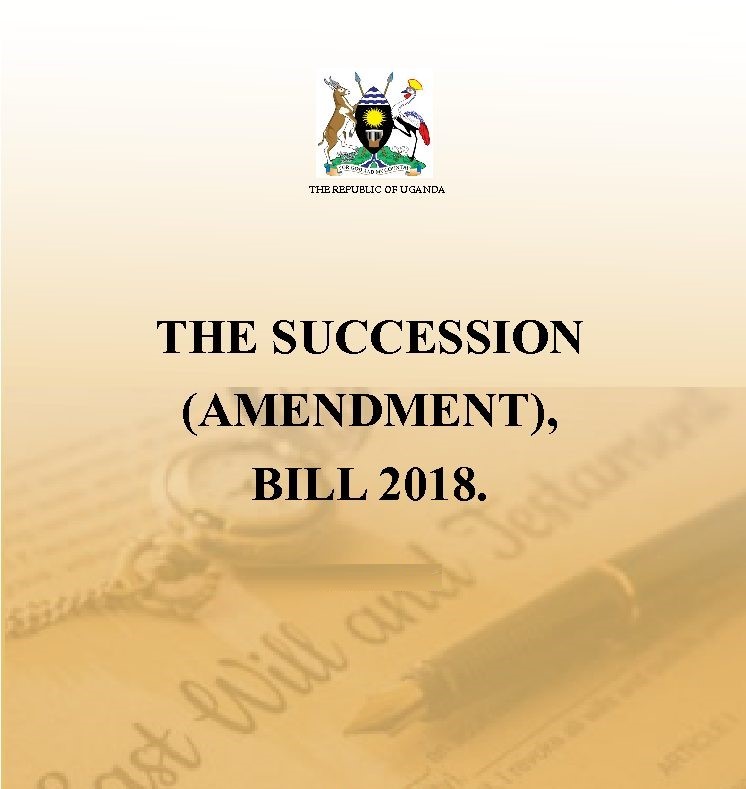 This brief   by Kleeva Associated Advocates highlights the key messages in the   Uganda Succession (Amendment) Bill 2018 and is part of our work to keep versed with new developments in our area of practice and to further provide information to our stakeholders for them to keep abreast with legal developments that may have an impact on them.  It is divided into four sections; section one is the introduction; section two presents a brief background to succession law in Uganda; section three highlights the key messages in the Bill covering the new insertions, key amendments substituting the old Act and the Repeals and section four is the conclusion.

The dynamics of inheritance and Succession have advanced in the contemporary world to become inclusive of wealth as owned by both female and male. Thus, the interests of both parties ought to be protected and access to information is one the pillars of critical importance to ensure that this objective is attained.

2.0 BACKGROUND OF SUCCESSION LAW IN UGANDA

Succession law in Uganda is traced back to the Succession Ordinance of 1906 which introduced British models of succession and inheritance. This ordinance however, exempted the estates of all natives from its operation and fell short on intestate succession. It presupposed that it was only the husband who would make a will. It was amended by the Succession Amendment Decree of 1972 to address its shortcomings to provide for intestate succession in Uganda as well[1]. The Amendment provided for illegitimate and adopted children[2]. However, its noted that it had some discriminatory provisions based on sex. For instance, under the Second Schedule, remarriage by a widow terminated her occupancy of the matrimonial home while the widower retained the house upon re-marriage[3].

The current Succession Act Cap 162 replicates most provisions of the Succession Amendment Decree. With time, recommendations, studies, and case law sought to address the anomalies in the law for instance, the Kalema Commission,[4] Ministry of Women in Development, Culture and Youth,[5]  and the Uganda Law Reform Commission study on the law of Succession in Uganda[6] reported challenges and made recommendations within the law and took cognizance of the provisions that were predominantly discriminatory.

The Succession (Amendment) Bill, (herein referred to as the Bill) proposes a number of changes that reconcile it with the provisions of the Constitution of the Republic of Uganda, 1995 and brings it at par with the current social-economic environment.

One of the key aspects in the Bill is gender sensitivity; to bring the inclusion of both women and men into the Act by replacing the words like husband/wife with “spouse” and man with “person”, making it possible for women to dispose of properties, and the protection of children rights and the rights of surviving spouses, ensuring the rights of spouses in the distribution of property. The Bill reconciles the age of a minor from 21 years stipulated in the Principal Act with Article 257(1)9(c) which provides for 18 years.

The Bill has repealed some sections of the Succession Act, it has amended some provisions, substituted some, and inserted new provisions into the Act. We shall therefore look at the key areas of interest in the Bill as hereunder.

3.1 INSERTIONS OF NEW SECTIONS INTO THE PRINCIPAL ACT.

3.2 KEY AMENDMENTS AND SUBSTITUTIONS OF PROVISIONS OF THE SUCCESSION ACT

The proposed Amendment Bill to the Succession Act is timely because there have been a number of cases pronouncing some of the provisions of the Succession Act as void, however, these had not been reflected in the Act. This Bill has thus reconciled case law and has taken into account the prevailing social, economic, and international trends making it consistent with the Constitution of the Republic of Uganda.

For Further Information on this brief, contact us at;

P.O. Box 33826, Kampala-Uganda, Email:  This email address is being protected from spambots. You need JavaScript enabled to view it.

[1] The Long title of the Succession Amendment Decree, 1972 stated therein ‘to amend the succession act to provide for succession to the estates of persons dying intestate, restriction on disposal of property by will and for certain other matters connected therewith.

[2] Section 2 of the Succession Amendment Decree, 1972, provided the definitions for child and illegitimate child.

[3] Second Schedule of the Succession Amendment Decree, 1972, paragraph 8(a)

[4] Report of the Commission on marriage, divorce, and Status of Women, 1965 (the Kalema Commission Report)

[5] study on the Administrator General’s Office, Research Project on Women and Inheritance, November 1993.

[6] Study Report on the Review of Laws on Succession in Uganda, July 2013